Many Jesuit objects have disappeared from the Cologne collection since the dissolution of the order in 1773. The evaluation of various sources, such as literature, archival records, catalogs, and inventories, have led provenance researchers to the traces of this scattered collection. Some of the items have already been traced and are to be added to the remaining stock in Cologne, at least virtually. Traces of a number of objects are still missing. At this point we want to present results, ask questions, and follow up on clues in order to document the Jesuit possession of the Cologne College. We would be grateful for any information that might shed more light on the subject.

What we know already 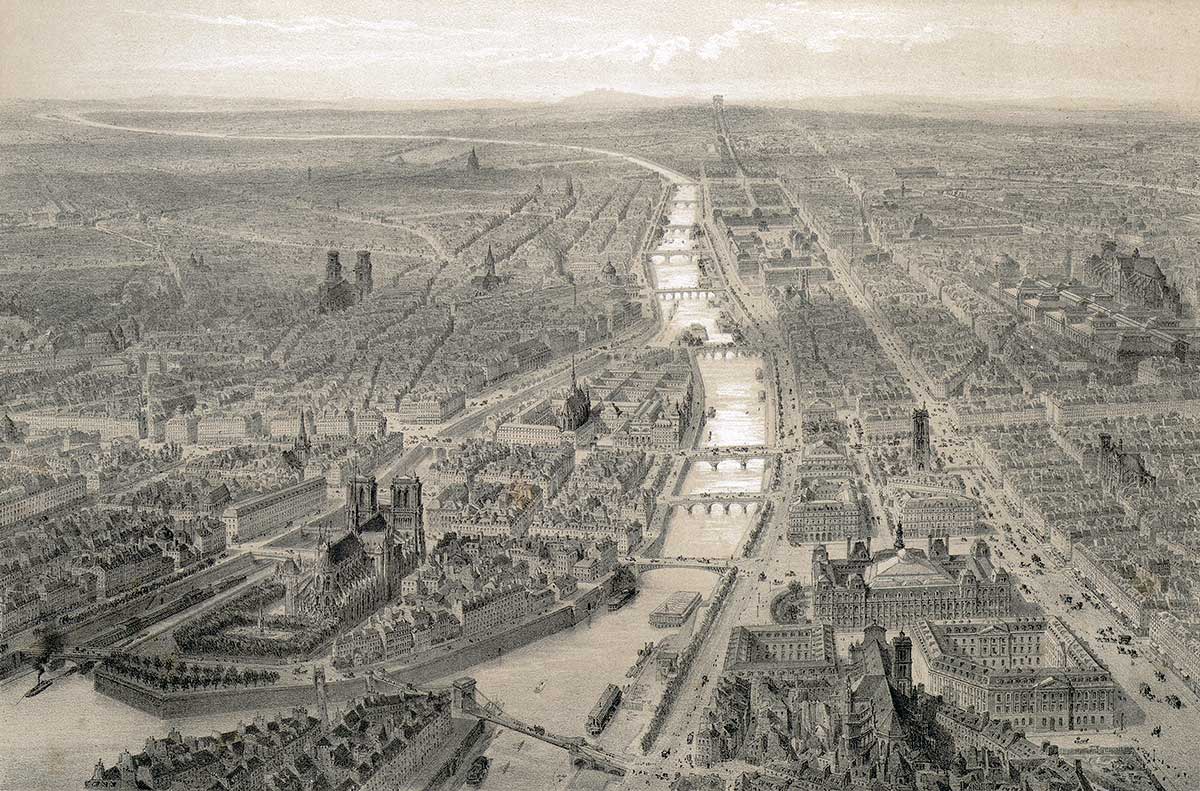 In the course of the French occupation, holdings from the Jesuit College in Cologne were the first collection to be confiscated in November 1794 and transferred to Paris, where they are still located today. On the morning of November 9, the French commissioners first turned their attention to the library holdings. Ferdinand Franz Wallraf gave a cursory description of the holdings from which works were taken, and also mentions that books did not end up in the National Library, but instead in the trade. The confiscations in the library also affected the albums with drawings and prints, which were housed together with books and manuscripts in the library room in the basement of the college.

The Musèe du Louvre still houses the majority of the drawings, some 27,500 sheets, which were stamped there after 1808 with the "Col." ("Envoi de Cologne"). The drawings, previously collected in pasted volumes, were detached from them and stored individually, roughly systematized and catalogued. It is noteworthy that the empty covers of these albums were kept in Paris. However, in order to open up this collection of drawings, which can be viewed, in its depth, the catalog prepared in the Louvre is not sufficient. It requires to this day the old Jesuit directory, the original of which is in the Historical Archive of the City of Cologne >

The 1778 Jacob Heyder catalog "Stampe e disegni, che si trovano nel museo del Collegio Tricoronato a Colonia" lists the drawings and prints that, according to Wallraf, were still intended by the Jesuits for the university collection. The catalog is located in the Historical Archive of the City of Cologne.

As with the drawings, the largest part of the print collection is in France, in the French National Library in Paris. The prints, which were also collected in adhesive volumes by the Jesuits, are available for consultation in 143 "portefeuilles" in the Cabinet des Estampes. These sheets were also stamped "Col."
Dietmar Spengler: Spiritualia et pictura : die Graphische Sammlung des ehemaligen Jesuitenkollegs in Köln ; die Druckgraphik, Köln, 2003 >>

The extent to which the collection was dispersed is also evidenced by the presence of six pasted volumes with printed portraits, which are located in the Gymnasium Library in the USB and most likely came from the Jesuits' possession. Currently, the badly damaged volumes are being restored. Work has already begun on examining and describing them from an art-historical point of view. Furthermore, it is planned to compare these prints with holdings from other collections (Musée du Louvre, WRM, UB Heidelberg, Waldburg-Wolfegg Collection).

Four weeks after the entry of the French, on November 9, 1794, the library of the ex-Jesuits (according to the French wording) was the first of the Cologne collections to be searched by the "Commissars for Science and Art" for valuable books and manuscripts and these were taken to Paris. Unlike the drawings and prints, no manuscripts or books were returned to Cologne. In an autoptic examination, however, the volumes should be easily identified by the ownership mark "Colleg. S. J. Col." or "Collegii Societatis Jesu Coloniae" on the title pages. The search for this provenance note of the Cologne collection is not yet possible using the online catalog of the BnF. Consequently, it can only be done through a title search and subsequent examination of the individual volumes in the Bibliothèque national. This first requires source research in the archives of Cologne, Duisburg (Roerdepartement) and Paris that goes beyond Wallraf's enumeration - another research desideratum.

What we already discovered

Cologne: More than 200 Jesuit books discovered in the library of Ferdinand Franz Wallraf

In the course of the restoration of the  Wallraf library >>, during which more than 10,000 volumes were checked book by book, our bookbinders discovered and recorded books of the Cologne Jesuits. These volumes have now been added to the online catalog with the link "Jesuit Library Collection" in addition to the virtual collection note "Ferdinand Franz Wallraf Collection". They thus represent a group of books that belong to the Jesuit property but not to the Gymnasium library. It is still unclear how the volumes came into Wallraf's possession or into his library. It is certain that Wallraf knew the Jesuit collection well. It is possible that he also "saved" these books after 1794. Here, provenance research is still faced with a puzzle. A more detailed investigation of the provenances could reveal further insights into the fate of the Jesuit collections around 1800.

In his will of 1861, Hittorff writes about architectural volumes that his father bought for him in Cologne from the Jesuits' previous possession. The architect, who worked in Paris, bequeathed his library  to his father's city; it has been in Cologne since 1898 and was physically reconstructed in the USB in 2018-2020 (newly placed under the shelfmark: HITT). Unfortunately, the mentioned architectural volumes were not found among the volumes available in the USB, possibly they did not come back to Cologne. However, there is evidence of a two-volume work by Gottsched a two-volume work by Gottsched in Hittorff's library with the previous ownership entry of the Cologne Jesuit College.

The holdings of the old Cologne City Library also include volumes of Jesuit provenance, such as the Thesaurus Theologicus by Matthäus Vogler. Frankfurt: M. Becker, 1612. Sign.: T2/1470], a work that was donated to the USB in 1943. Due to the loss of our acquisition files before 1945 due to the war, we can no longer find out who the donor was. We expect to make further finds in the course of the restoration of the city library collections.

What we look for

In May 1920, the holdings of the City Library were combined with the libraries of the Commercial College and the Academy of Practical Medicine to form the USB, in order to serve as a central library for the university, which had been reestablished the year before. An essential part of the city library is the so-called Gymnasialbibliothek, the basis of which was the book collection of the Jesuits and which is the property of the Kölner Gymnasial- und Stiftungsfonds.
On July 25, 1922, the USB sold 314 incunabula that were supposedly duplicated. (We now know that each copy of these first printings is unique because of the book's layout, traces of use, and provenance.) Among the 30 incunabula that the Berlin State Library purchased at auction was the Cologne print "Gerson, Johannes: Monotessaron seu Concordantiae evangelistarum. Cologne: Arnold ter Hoernen, c. 1473," which can be proven to have come from Jesuit ownership. 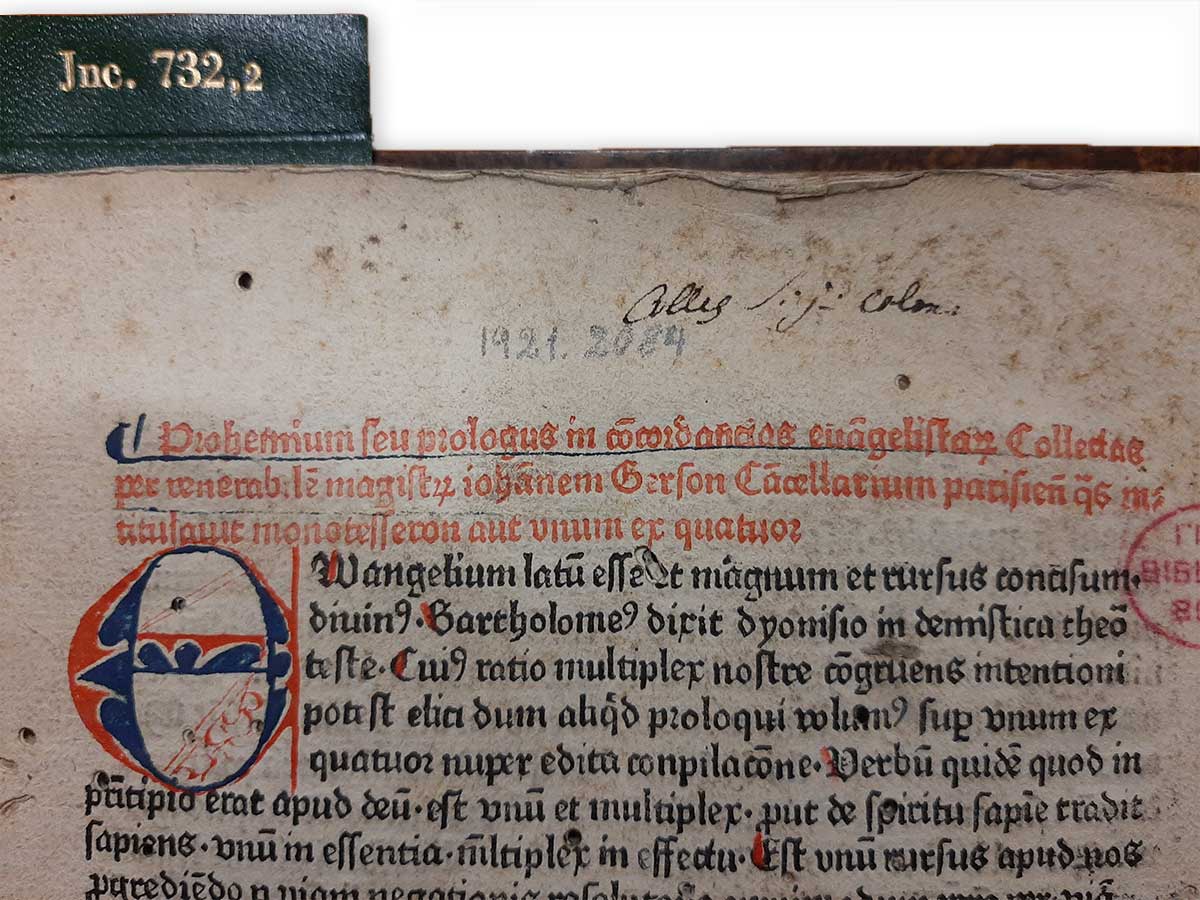 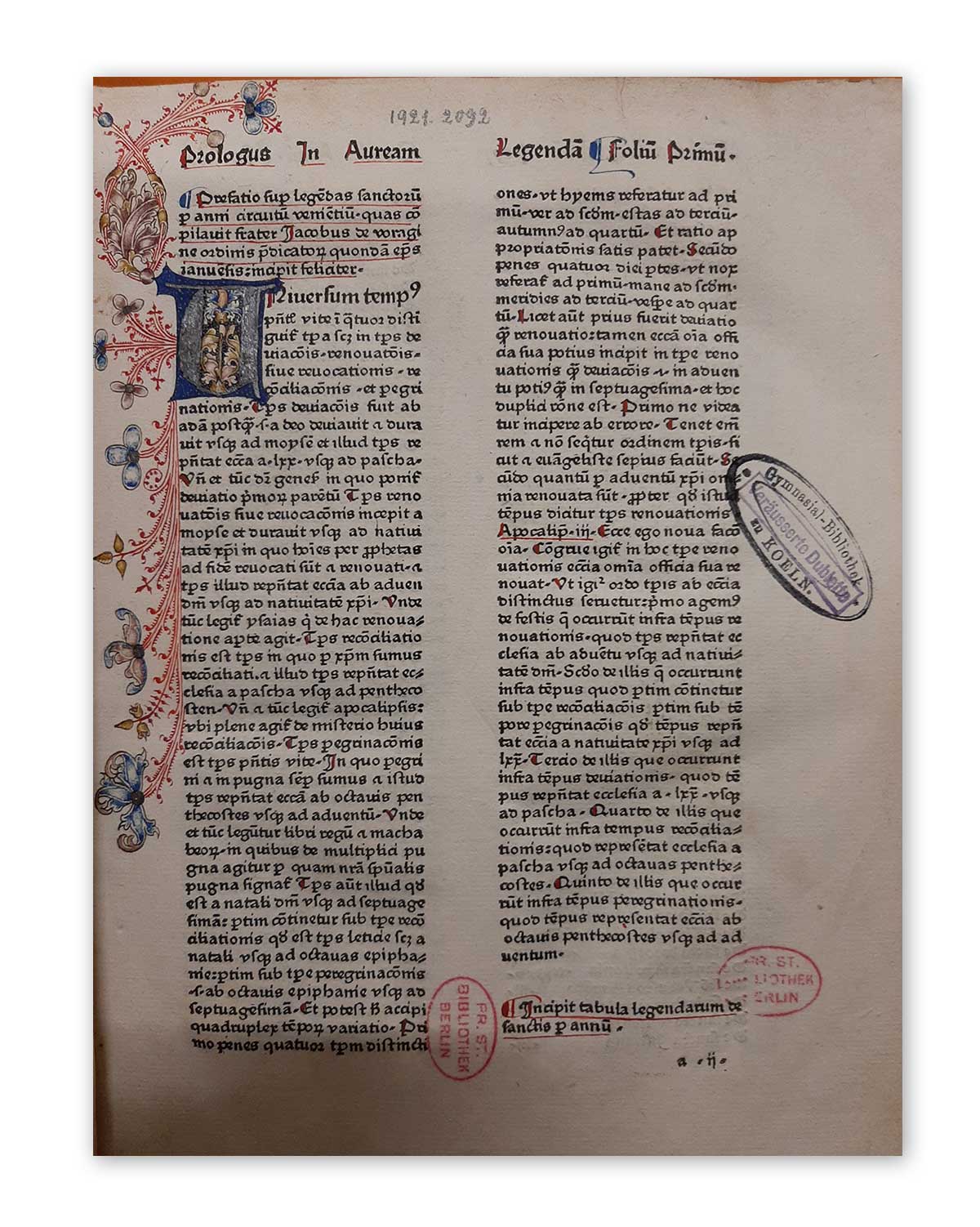 
Since the city of Cologne had forbidden the sale of books from the Wallraf library (source: HAStK, Bestand 608 A 163, Bl. 13. We thank Dr. Heidrun Edelmann for the source reference), one resorted to duplicates from other collections, especially from the Gymnasiumbibliothek. Unfortunately, 14 of the 30 incunabula are among the war losses of the Staatsbibliothek zu Berlin. (Kind thanks to Dr. Falk Eisermann, Berlin State Library).
Currently we are trying to find out which of the Cologne incunabula and early printed books were sold at auction, where they are today, and whether some and, if so, which of them once belonged to the Jesuit Library.
It is also known that there were duplicate sales from the grammar school library as early as the 19th century. It is not yet clear whether volumes from Jesuit possession were among them.

Where is the natural history collection of the Cologne Jesuits?

At this point, another research desideratum should be mentioned, because so far there are no indications of the whereabouts of the natural history collection (Naturalienammlung) of the Jesuits. That such a collection existed is sufficiently proven. Thus Regens Heinrich Frings (1718-1780), professor at the Tricoronatum from 1749-1767, demonstrably expanded the art and natural history collection, from Frings, H.: Promemoria de legentibus 1774, HAStK Univ.-Akten Nr. 992; cf. Quarg, p. 30, note 80. Books from his possession could be proven in the Jesuit library, see: Heinrich Frings im Kölner Provenienzportal: Heinrich Frings im Kölner Provenienzportal >>

In addition, eight volumes of magnificent copperplate engravings are known to have been placed in this cabinet and are now in the USB Cologne (GBX369+B - N1/105): “Kupfer-Bibel: In welcher Die Physica Sacra, Oder Geheiligte Natur-Wissenschaft Derer In Heil. Schrifft vorkommenden Natürlichen Sachen / Deutlich erklärt und bewährt“ von Johann Jacob Scheuchzer; Johann Andreas Pfeffel. Augusburg: Wagner, 1731-1735.">> The cabinet, according to the description there, contained not only natural objects, but also antiques and curiosities! 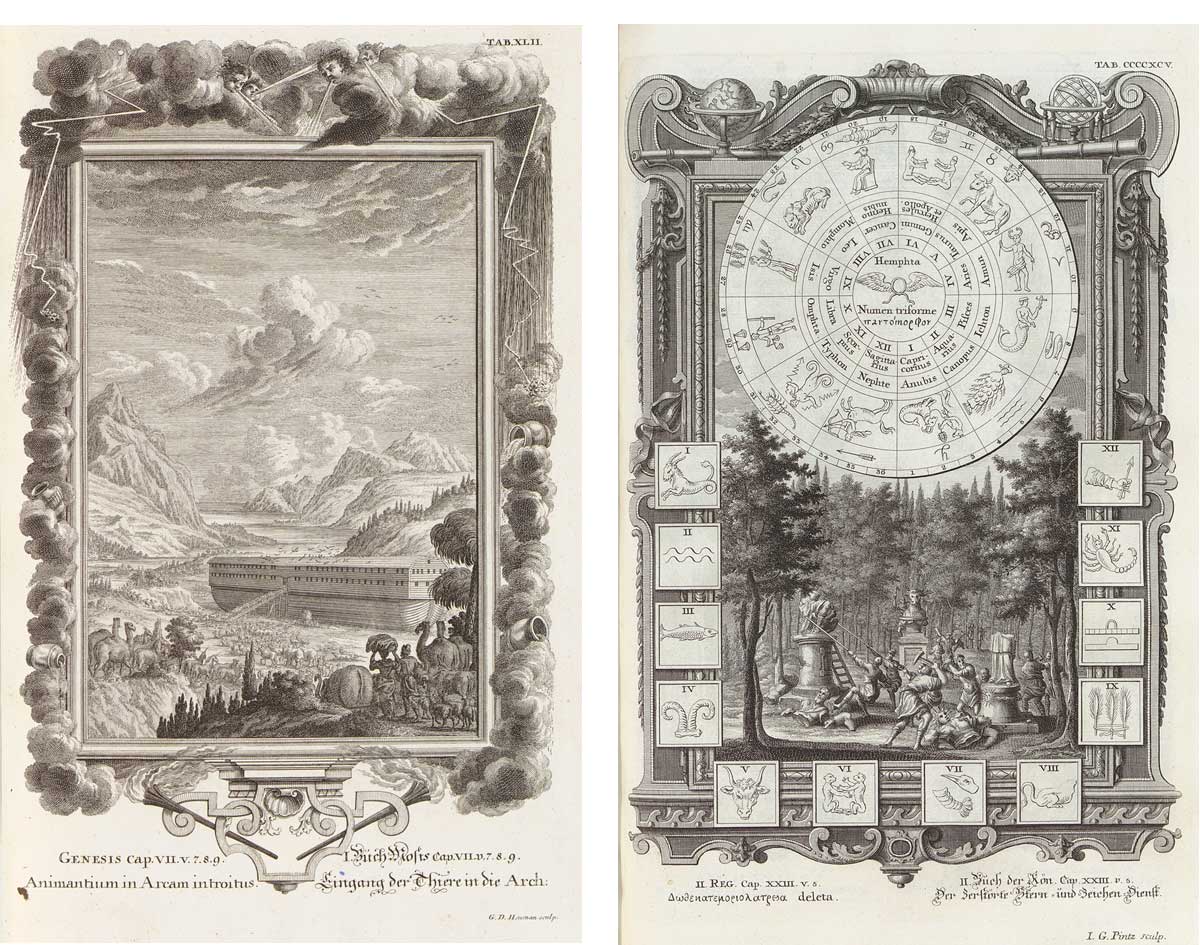 Illustrations from Johann Jacob Scheuchzer's 'Copper Bible'. The eight-volume work was placed in a cabinet of the Jesuits, whose collection items are otherwise missing any trace.

Ferdinand Franz Wallraf also explicitly mentions the "Natural Zimmer" of the college: "After the plundering of the library (...) one proceeded to plunder the Naturalien-Cabinet and Museum, which had been sealed until then" and he lists objects of the mineral collection. More detailed is the "Inventaire du Cabinet de Mathématiques et Physique", today in the main state archive in Duisburg.

Were there objects from the Jesuit mission stations?

At the sites of their missionary activities, Jesuits collected objects and compiled them in their teaching collections. Therefore, it can also be assumed for the important Jesuit College in Cologne that there was a collection of objects that came from distant countries.